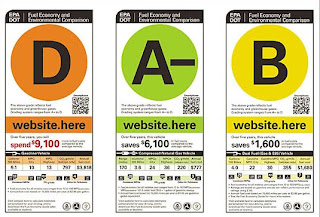 If you’re planning on buying a car soon, the EPA wants to make sure you consider green options. But so far all their attempts have been… confusing.

Federal regulators proposed that all vehicles come with a label containing information about its fuel economy. There are two versions of the label: a vertical one with a letter grade, and a horizontal one which shows the vehicle’s fuel efficiency and emissions ratings. Both have code stickers that can be read by smart phones. But it seems that smart phones are the only ones able to figure them out.
In an independent online survey by Siegal + Gale, 47% were confused by the vertical version and 38% couldn’t make out the horizontal. And that smart phone sticker just didn’t help – 12% reported being confused by it as well.

Most mystifying were the use of unexplained terms such as “miles per gallon equivalent” and the meaning of the letter grade. But even if the labels had been clearer, they might not have been very effective.

The survey suggests that the labels emphasize the wrong information – it seems that fuel emission status doesn’t really get people’s attention. What does? Money.

Annual fuel cost and fuel savings ranked top on the list of priorities for customers. Many are willing to buy an eco-friendly vehicle only if it costs about the same as a regular one. “The recommendations are simple: Scrap the vertical label, lose the letter grade and emphasize the mpg and cost of owning the vehicle, if the EPA takes these steps, it may be successful in increasing the number of fuel-efficient vehicles on the road and communicating clearly with consumers,” says Siegel.

The EPA will choose a final label after the public comment period ends in late November. Hopefully they choose a model that allows customers to make smart, well-informed decisions instead of leaving them scratching their heads.