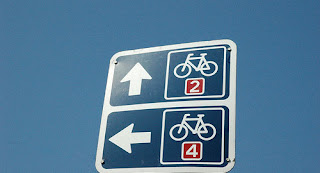 Bicycles are in, cars are out-at least for two new Bicycle Superhighways planned for Copenhagen and London. Copenhagen in particular has become a leading example of progressive alternative transportation routes. With a 9-mile-long bicycle highway planned to be in use by 2011, Copenhagen is hoping to increase commuter bicycle use from 37% in suburban areas and an already impressive 55% in urban areas to an overall use of 50%.

These bicycle super highways are characterized by blue lanes. Although sometimes they are shared with pedestrians or other alternatives modes, the super-highway, called “Noerrebrogade,” will only be for bicycle use. Regulated by a system of traffic lights that gives cyclists priority, the road will feature several “pit stops” where cyclists can have their tires pumped, chains repaired, or stop for a rest and a glass of water.

All of this is fantastic for Denmark, but it begs the question; What is the United States doing for our cyclists? The Bicycle Commuter Act, established in 2009, allows participating employers to give employees who regularly bike to work up to $20 a month, which, with dedication, equals out to $240 dollars a year. But what about the roads these commuters are riding on? Driving on American roads is risky enough, and there is a noticeable lack of bike paths in most major cities. Denmark is leading the way, but how long will it be before we follow?