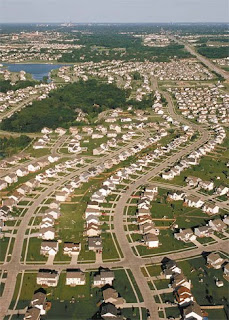 “There’s nothing to do around here!” If you grew up in the suburbs like me, your parents probably got this a lot. Single family houses sprawled miles from stores and restaurants left us suburban teens dependent on our parents to go anywhere in town. However since many of our parents worked in business districts far from our residential developments, rides were often hard to come by.

This suburban imprisonment I found myself in was a direct result of the zoning standards established by the Cleveland suburb of Euclid in 1922. Upheld by the Supreme Court in 1926 and proliferated by the post-World War II suburban explosion, the geographic separation of business, commercial, and residential districts has become omnipresent across the country. This separation has made automobiles a necessity for travel of any kind and the use of efficient public transportation nearly impossible.

Altering the way towns have been planned and built for the last half century is not an easy or instant process, but some are already making progress. The Smart Growth movement focuses on revitalizing existing urban and suburban centers and planning new developments using town-oriented mixed land-use patterns. This shift offers more sustainable alternatives to driving and fosters a sense of community, which today’s suburbs lack.