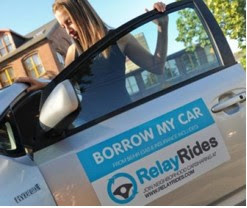 As a teenager, my friend Tom used to “borrow” cars parked at the train station and take them on joyrides. He finally got caught after returning a car and finding the original parking space taken by another car. Tom didn’t know it then but he was using the same concept promoted by RelayRides, a Boston based peer-to-peer carsharing service. The big difference is that while Tom never paid to borrow his car, RelayRides actually pays you for sharing.

Unlike Zipcar, which maintains a fleet of 7,000 cars, RelayRides and another new Bay Area competitor, Spride Share, rely on a user-base of car owners who register their cars with RelayRides for the opportunity to earn up to $4,600 per year to share an economy car just 20 hours per week. Given that 18% of the average American’s income is devoted to owning a car that is used just two hours per day, this is found money.

RelayRides calls their peer-to-peer concept, “collaborative consumption”. They see an increased trend of sharing that is built on the belief that “access to goods is better than actually owning them” and according to RelayRides, a typical carsharing vehicle takes 14 other cars off the road.

The setup is similar to the Zipcar model. Users register at the RelayRides website (currently no registration fee!) and then reserve a car for a minimum of one hour with 15 minute additional increments for as low as $6.00 per hour. RelayRides takes a commission for each use, picks up insurance coverage and there is a fuel card in every car when you need to fill up the tank.

Each car is covered by a $1 million dollar supplemental insurance policy so the car owner’s policy does not come into play if there is an accident. However, there is a $500 deductible and if you are between the ages of 18 to 20 you will need to be covered by mom and dad’s policy.

RelayRides claims that their vehicles are typically priced $1 to $2 less per hour than the competition but based on my very unscientific comparisons, Zipcar is offering $7.00 hourly rates for recent models in many Boston and San Francisco area locations which compares favorably to the $8.00 hourly rate for newer RelayRides vehicles.

RelayRides is currently operating out of Boston and San Francisco and they want you to help them by voting for your town. As of now, Anchorage, Alaska is in first place.