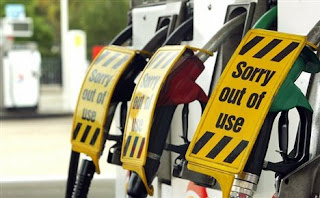 A long, long time ago in 2008, oil prices broke triple digits for the first time. Peaking around $150.00 a barrel, it seemed the apocalypse was near. For the speculative and dramatic, the supposed dwindling supplies, extreme price hikes, and world-wide recession meant only one thing: NO MORE OIL.

But here we are, fresh into 2011, still filling our tanks and guzzling our gas. Oil’s still here. And it’s future is actually looking pretty bright. Although gas prices are expected to rise again this year, analysts are confident that we’re not in for a repeat of 2008.

Foresighted companies are adjusting their spending to avoid a crisis, the economy is in better straits, and, the big one, we’ve got more access to oil.

But this may not be such great news.

As Chief Economist of the International Energy Agency Dr. Fatih Birol put it, “We’ve got to leave oil before it leaves us. The earlier we start, the better, because all of our economic and social system is based on oil, so to change from that will take a lot of time and a lot of money and we should take this issue very seriously.”

But Birol’s advice seems to fall on deaf ears. Instead of distancing our economic and social system from oil, it’s become a tool to remedy the world-wide economic rut: resource nationalism is easing, countries like Russia and Venezuela are now open to foreign investment, OPEC has made clear its willingness to pump more crude…

The 2008 crisis still looms ominously over analysts and companies, and countless statements have been made assuring oil is well-supplied and no sharp price hikes are on the horizon. We’re desperate to prove how far we’ve come since that devastating year.

Perhaps, though, the lady doth protest too much. Despite proclamations otherwise, there is still a palpable fear of spiraling prices and economic frenzy.

But although the 2008 crisis was, well, a crisis, it forced many to cut back oil consumption. And that’s a good thing. Now, with our grand supplies it’s even more important for the consumer to take matters into their own hands. It’s up to us to cut back on our own.