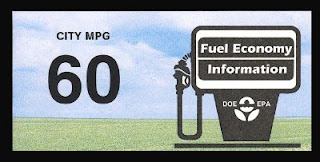 Remember Jerry Ford, the accidental president? The guy who President Johnson once said “is so dumb he can’t fart and chew gum at the same time.” Ford’s half term in the White House was rocky but one of his successes was the the Energy Policy Conservation Act of 1975 which introduced Corporate Average Fuel Economy (CAFE) standards.

Now the Obama Administration is considering new standards and big auto is squawking. In a letter to Rep. Darrell Issa (R-Calif.), head of the House Oversight and Government Reform Committee, the Alliance of Automobile Manufacturers, an industry trade group representing 12 automakers including Ford, GM and Toyota, is raising concerns over proposed regulations that would increase fleet-wide fuel efficiency standards for automobiles to as high as 62 MPG by 2025. According to the Alliance, the proposed rules “have the potential to impose significant additional costs on the car buying public.” However, although costs for the 62 MPG standard are estimated by the U.S. government to be about $3,500 per vehicle, car owners can expect a net lifetime savings due to increased vehicle efficiency of $7,400. Not a bad ROI.

The Alliance’s letter marks a break with the Obama administration. After years of opposition to any increases in CAFE standards, Alliance representatives joined President Obama at the White House last year to support a 30% increase in the 2010 fuel-economy standards from 27.5 MPG to 35.5 MPG by 2016. So why the change of heart? The Alliance sites a report by the Center for Automotive Research, an industry supported group, that calculates additional costs to be $6,435 per vehicle and a lifetime fuel savings of only $2,693 which will result in a loss of as many as 220,000 automotive jobs.

But will it? With continued improvements in hybrids, engine design, lighter equipment materials and the announcement yesterday by Volkswagen of a car that can travel 313 miles on a gallon of diesel, this looks like an achievable goal.