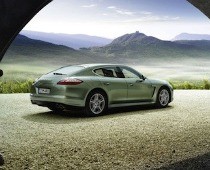 Porsche is introducing a hybrid model of its popular four-door, four-passenger Panemera performance sports sedan. The new Porsche Panamera S Hybrid will be a 380 HP vroomer that still manages to crank out 60 MPG on special low-rolling-resistance tires developed especially for this model.

Porsche says that in addition to being the most efficient Porsche of all time, the Panamera S Hybrid also is one of the fastest, accelerating zero to 60 in just 5.7 seconds, to a top track speed of 167 MPH. Electric-only acceleration carries the car to just over 50 MPH, then the engine kicks in.