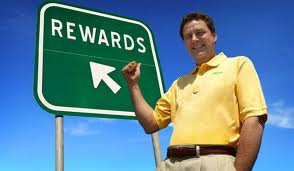 The company gets funded by retailers who wish to tap fresh business from Nuride’s member pool. They also get paid by government agencies aiming to increase fuel economy, reduce pollution and traffic congestion.

Nuride members track the money they’ve saved, emissions prevented by their green trips and their Nuride points (based on Nuride miles) which are redeemable at retailers like Starbucks, Home Depot, Target, Amazon.com and Blockbuster. Each green journey could possibly earn at least $1.00 since each Nuride mile is worth a cent. Rewards could be earned within the first week.

There are some limitations. Members are limited to two trips a day (each trip being a minimum of five miles each), 10 trips a week and earning rewards up to and not more than $1,000.00 annually. To effectively reduce traffic and emissions, there must be a minimum of two adults per trip in a motorized vehicle. To join Nuride, members have to be at least 18 years old and affiliated with an employer or school.

Other noteworthy features the program offers is the flexibility and control it offers its members in choosing when and who they carpool with. Other information available includes the kind of car used for carpooling and if other riders smoke. As a security option, members can create their “Do-Not-Ride” list which prevents other riders from contacting them.

Since the launch in 2002, NuRide is going strong with its 57,500 members in Connecticut, Texas, New York, Virginia and D.C.