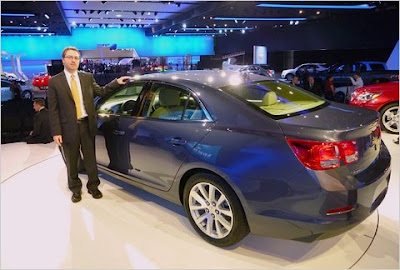 Jim Kliesch, a senior engineer at the Union of Concerned Scientists, an environmental group, pointed at the 2013 Chevrolet Malibu Eco, one of his favorite cars on the floor of the New York auto show. Like a surprising number of cars unveiled here this week, the Eco — with a mild hybrid system, direct injection and subtle efficiency tricks like active grille shutters — is expected to achieve nearly 40 miles a gallon on the highway when it reaches the public next year.

Another show car Mr. Kliesch gravitated toward is the 2012 Honda Civic HF, whose improved aerodynamics and low-rolling-resistance tires help it achieve a claimed 41 m.p.g. on the highway, without hybridization.