At a Solar-Paneled Crossroads: Plug In Hybrid Vehicles Powered by the Road 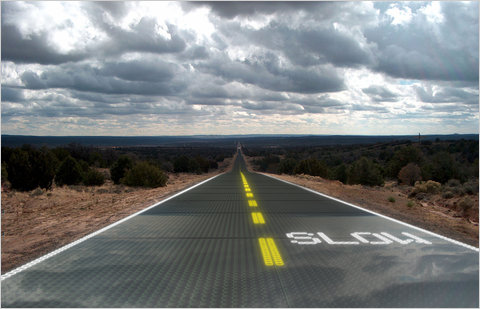 We’re buying electric hybrid cars, pouring alternative fuels into our gas tanks, driving a little slower, using special synthetic oils to increase fuel economy… We have become so obsessed with improving what and how we drive that we might be overlooking a crucial element: what we’re driving on.
Solar Roadways, whose product is their namesake, is undertaking a huge and innovative project that would uproot all of America’s asphalt and replace it with solar panels and LED lighting. On the surface, this grandiose idea appears cumbersome and unrealistic. Until you start considering all the applications this new material would offer. The panels would emit enough heat to melt ice, potentially reducing the number of ice-related accidents. The LED lights would replace the painted yellow and white lines and project real-time warning messages for drivers, such as “Deer Crossing Ahead” and “Change Speed Limit.” Thousands of these tiny solar collectors could generate enough electricity to power adjacent communities and supply energy to charging stations for plug-in hybrid vehicles, like the Prius. It’s a triple-threat transportation surface.
Even the Department of Energy has faith; they’ve spent $100K to fund this futuristic prototype. But support from the DOT doesn’t mean this road will necessarily go anywhere. Plenty of similar experimental ventures, like the proposed moving sidewalk in Altoona, PA, fell flat on the ground they were intended to change. According to the DOT, implementation of this technology nationwide will cost around $5 billion. But that figure seems awfully low considering construction costs for regular blacktop interstates are roughly $6.5 million PER MILE.
Will the benefits derived from this solar-powered technology offset the extraordinarily heavy costs, allowing us to move ahead into a non-petroleum based future? Or can we invent a more practical and less costly alternative fuel infrastructure?