Many hybrid vehicles are implementing the use of regenerative braking systems – harnessing the kinetic energy generated by braking and then applying it to practical use, recharging the batteries. Toyota has been advertising this system as part of their “Ideas For Good” campaign, and GE plans to implement similar technologies in trains to harness the immense energy required to bring a locomotive to a stop.

On a smaller, but still useful, scale, a lab at M.I.T. has invented what they call “Biking 2.0.” They developed a bicycle with a small generator attached to the wheels that can also harness the rider’s braking power. The bike then stores the power for later so it can be used in bursts to power the bike. Essentially, you are generating the power for the bike yourself. Talk about alternative fuel! The inventors 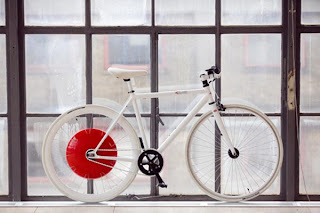 see as a fantastic way to get more people to ride, especially those who might not otherwise have been able to – like the elderly, or people who live too far away from their jobs to commute easily by bike. The Biking 2.0 system makes biking longer distances a more viable option. The bike’s sleek design is attractive but also cumbersome, and the developers are looking into ways to reduce the bikes mass in order to appease current trends of lightweight bicycles.

While it’s doubtful that Biking 2.0 will replace the original bike, hopefully the technology behind it will continue to grow and improve. Harnessing braking power will continue to be used to generate extra power for hybrid cars, and as more modes of transportation make the shift to electric power it will become a more and more valuable technology. And for those who need the occasional boost, biking 2.0 is there for you.