City’s Next Taxi: A Nissan Van Short on Looks, Perhaps, but Full of Comforts 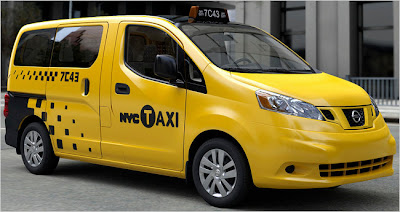 The next New York City taxicab will have airplane-style reading lights, passenger air bags, and a so-called low-annoyance horn, engineered to stifle flagrant honkers. The back seat even has more leg room than the old couch-on-wheels Checker cab.

But can a minivan win over New York?

The Nissan NV200, a bulky four-door van that seems more soccer mom than Travis Bickle, will become the all-but-exclusive vehicle of the city’s taxi fleet, the Bloomberg administration said on Tuesday, in the culmination of a contest of several years to redesign a city icon.

The minivan has a traditional, unstylish look, which even Mayor Michael R. Bloomberg conceded resembles a family car. Asked on Tuesday if the car had a suburban feel, the mayor smiled and replied, “That’s probably true.”

Read the entire article at: The New York Times